I’ve abandoned using SoftBody in Godot to model my initial proof of concept sails in Square Rigger. Now I’ll be modelling them using shaders. This is new territory for me and in addition, I’m terrible at maths. I’m also starting to get a development workflow going and have discovered how to disable lights in isolated scenes.

Using soft bodies in Godot was not yielding the results that I wanted. I really hope that this area of Godot is further developed and becomes easier to use, especially with regard to force fields and to pinning vertices of the mesh to fixed points.

Shaders have always daunted me as I’ve been afraid of the mathematics and have not until now spent sufficient time to understand their structure and how they worked in practice.

I have seen some excellent examples and how powerful this approach can be. It will make some of the modelling a bit more difficult for me, but the initial visual impact will be worth it.

In the first instance I’ll just be modelling a basic sail billowing in the wind and the maths function will be simplistic. Later on I can think about secondary effects such as textures, sagging and rippling. 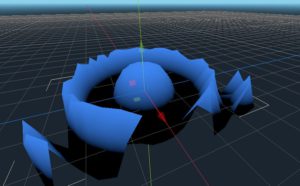 This is the effect I get if I apply the basic ripple equation from my last blog post before any tweaking. 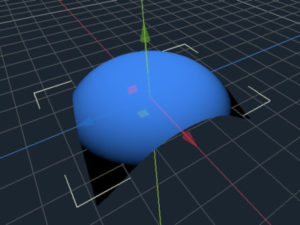 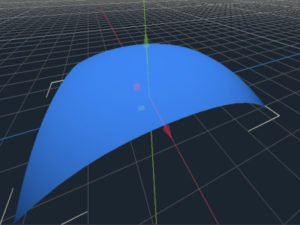 A few adjustments later and the custom sail mesh I had exported from Blender as a DAE file is looking a little more like a sail.

This last little tip I learned when trying to focus on one scene. Running an isolated Godot scene requires the addition of its own lighting to see what’s going on and this was carrying through into the main scene and spoiling the lighting on the sails. I found that I could disable the lighting such that it would only be contributing when I was working on the isolated scene. 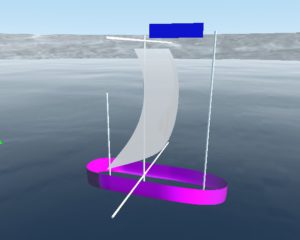 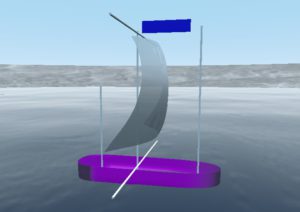 The result is much better when all the scenes are loaded as only the main scene lights are contributing.

About the Author: Ian Clayton

I was brought up in Oban on the West Coast of Scotland. I've worked in IT as a software engineer for all of my professional life, cutting my coding teeth on the ZX81. I went freelance in 1994 and when not coding at the keyboard, I like to brew beer.